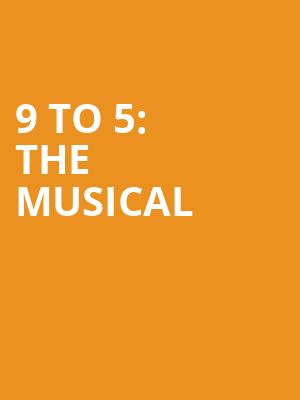 All images, logos and graphics are property of the production

Outrageous, thought-provoking and even a little romantic, 9 TO 5: THE MUSICAL features a cracking score by Dolly Parton - star of the film it was based on.

From multiple Grammy Award-winning songwriter DOLLY PARTON, the Tony Award-winning director of Wicked and the Tony-winning choreographer of In The Heights comes 9 to 5: The Musical, a hilarious story of friendship and revenge in the Rolodex era. This all-new musical comedy based on the hit movie features the blockbuster title song plus an exciting new score of 18 original numbers by Dolly Parton that mix Broadway and pop with her signature witty lyrics.

What is the story?

Set in 1979 - when Wall Street was hot and 8-tracks were cool - 9 to 5: The Musical is about three unlikely friends who conspire to take control of their company and learn there's nothing they can't do - even in a man's world! Outrageous, thought-provoking and even a little romantic, 9 to 5: The Musical is about teaming up and getting credit... it's about kicking butt and taking care of business.

"9 to 5, yeah, they got you where they want you." Pushed to the boiling point by their boss, three female co-workers concoct a plan to get even with the sexist, egotistical, lying, hypocritical bigot - a plan that spins wildly and hilariously out of control.

Three women depose their smarmy boss and begin making woman-friendly changes in the workplace. Based on the 1980 hit movie that starred Lily Tomlin (a victim of the glass ceiling), Jane Fonda (her husband left her for his secretary) and Dolly Parton (subject of sexual gossip spread by the boss).

9 to 5 is suitable for all the family.

2 hours and 30 minutes, which includes one 15 minute intermission.

About Colorado Springs Theater: We are an independent show guide not a venue or show. We sell primary, discount and resale tickets and prices may be above or below face value.

View all times and dates

Sound good to you? Share this page on social media and let your friends know about 9 to 5: The Musical at Pikes Peak Center.